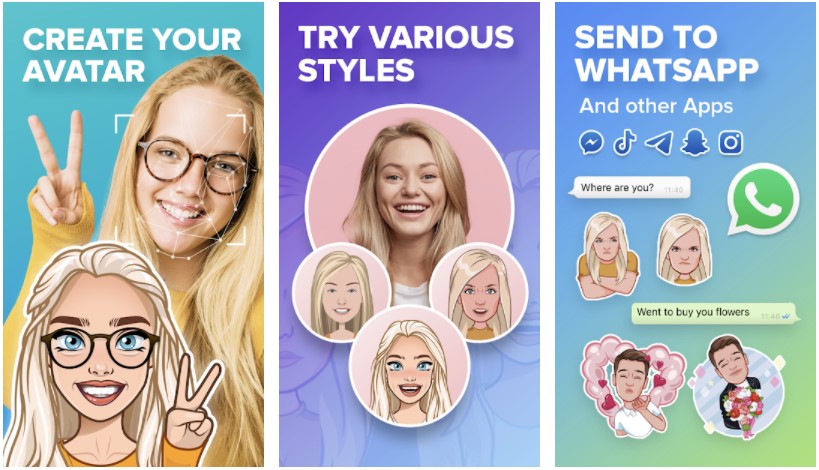 In this post, I’m going to show you some of the coolest avatar maker apps that are available on both Android and iOS platforms.

You can use these avatars in various ways such as social media or video games. They are great for people who enjoy playing online games with friends or just like to have fun on social media sites like Facebook, Instagram, Snapchat, etc. It’s always nice to see someone’s face when reading their comments online.

Creating your own avatar is really simple with these cool apps so let’s get started!

All the app names and download links are mentioned below – simply follow the article to find out more.

In Avakin Life, you can pick your own avatar in which then you can modify to your preference: body posture, hair, and eye color. Then, go crazy with our avatars based on each individual’s preferences and style.

Avakin Life also not only allows you to create avatar, but it also lets you to meet new people from all around the world and talk with them. In addition, we can also decorate and build our ideal house while travelling through stunning virtual world.

When you’re done, take a photo of the avatar you made and post it on social media such as Instagram or Facebook. The software, which was launched on December 10, 2013 by Lockwood Publishing Ltd, has already surpassed 50 million downloads on the Google Play Store.

ZEPETO entered the scene at the beginning of 2018, and it exploded quickly. Almost everyone is attempting to develop their own version of the avatar and post it online.

Are you one of them?

With Zepeto, you can decorate your avatar with popular things like clothes, cosmetics, and hairstyles. Then go on a journey through ZEPETO’s world, which offers an infinite number of maps to explore. Invite your pals to have some fun as well!

Create your own avatar and let it run free. ZEPETO was rated 4.1 on the Google Play Store, achieving more than 50 million downloads.

Dollify is the perfect app to create cute and adorable avatars like dolls.

You can choose hairstyles, eye colors, outfits, accessories such as glasses, necklaces, and earrings, to add mustaches, beards, and even birthmarks.

This game is incredibly fun, and it boasts a number of features that will appeal to both adults and kids. One excellent aspect about this software is that players have a lot of alternatives when developing their own character!

After you’ve finished creating your design, save the picture and use your avatar as a profile photo on social media! Because it is simple and easy to use, the app, which launched on December 18th, 2018, has already attained over 10 million installations on the Google Play Store.

In contrast to previous applications, ToonMe allows us to construct avatars from selfies we take with our camera. Yes, with artificial intelligence, our self-portraits will be converted into cartoons or vectors automatically.

With ToonMe app, you can transform your face and body into an animated character with a single touch. I’m actually impressed by how fast it goes.

It’s not difficult to believe that Linerock Investments LTD’s app, has been downloaded more than 10 million times on the Google Play Store.

Bitmoji is one of the best avatar maker app for Android and iOS. It’s been around for a while now, and it has more than 100 million users!

The best thing about Bitmoji is that you can use your camera to scan your face and turn it into an avatar.

After creating the perfect character, you can share your creation with friends on social media or even use it as your profile picture. You’ll never have to worry about not having the perfect representation of yourself again!

SuperMe (previously SuperMii) is a popular cartoon avatar maker app that allows you to make comic cartoon avatars right on your phone.

With SuperMe, you can make and display your own unique cute cartoon style avatar on the Internet.

ToonApp is relatively new app compared to other apps above. This app developed by Lyrebird Studio and released on December 22, 2020. What does this app provide?

With ToonApp, we can convert photographs into cartoons in just one touch. AI filters allow images to be transformed into animations in a matter of seconds. We can also add a backdrop to make out avatar more vivid!

On the Google Play Store, this free app has a rating of 4.2 and 10 million downloads.

Let’s go to another app, Avatoon. With this app, you can create a customized avatar. Avatoon includes a face recognition feature that copies our appearance.

After that, you have the option of using the template of the location given or taking a photo from the beginning as a backdrop. You may alter your avatars’ posture and expression to make it seem more alive.

The last stage, don’t forget to save the picture and share it with your friends on social media. And there you have it!

According to Google Play Store metrics, the app, which was developed by IdeaLabs on December 20, 2019, has already been downloaded more than 10 million times.

Have you ever wanted to live stream but didn’t want your identity to be revealed? With this software, you can now do it.

REALTY is an app that allows you to make a 3D avatar using your phone’s camera. You may use this program to broadcast live gameplay for real-time chat with friends by using a 3D avatar.

With this app, you may keep your identity completely secret since viewers can only see your avatar!

Furthermore, you can completely customize your 3D avatar to your preference, including gender, eyes, hair style, skin tone, accessories, and much more!

You may also use it for profile pictures, stickers, and even personalized emoji keyboards to make your messaging more enjoyable.

Just like the other avatar maker apps on this list, you can further personalize your avatar with a variety of customization, including eyes, hair style, mouth, face features, accessories, skin color, and more.